It is with much regret that we have decided to cancel the Fall Festival to respect the health and safety of all participants.

The members of Balsam Range are extremely proud of their home of Haywood County, NC and invite you all to come visit their beautiful part of the country!

The 2018 International Bluegrass Music Association’s Entertainer of the Year, Balsam Range, has become one of the genre’s most award-winning acts. Since forming in 2007, the group has garnered 13 IBMA awards on the heels of 8 critically-acclaimed albums. Balsam Range has left audiences spellbound while headlining major festivals from coast-to-coast, selling out venues across the nation and in multiple appearances at the Grand Ole Opry. The band collaborated with the Atlanta Pops Orchestra Ensemble to record 2 albums, the second of which, Mountain Overture, debuted on the Billboard Bluegrass Chart at #5 and the Classical Crossover Chart at #6. Their previous outing, Mountain Voodoo, debuted at #4 on the Billboard Bluegrass Albums Chart and remained on that chart for 45 weeks. Three singles from that album reached #1 on the Bluegrass Today Chart, including “Blue Collar Dreams,” which spent three consecutive months at the top. The band most recently claimed the #1 radio chart spot with their single “The Girl Who Invented The Wheel.” In addition to winning Entertainer of the Year, Balsam Range vocalist Buddy Melton won IBMA’s Male Vocalist of the Year and bass player Tim Surrett won IBMA’s Bass Player of the Year in 2018 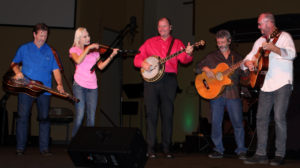 The Farm Hands are one of the most exciting and in demand bands in Bluegrass Music. Since their inception in 2010, the band has received over 80 award nominations, winning an unprecedented 30 major awards including Bluegrass Gospel Band of the Year at the 2019 Bluegrass Music Awards.

Their YouTube videos, Facebook, and Twitter pages have thousands of followers.   They are one of the busiest touring bands in bluegrass, performing over 150 dates per year. 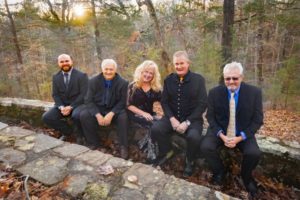 Cedar Hill was first formed in 1967 when Frank Ray along with his uncle began playing local shows in the Ozarks along with 4 others that included twin fiddles. As their popularity grew, Frank’s uncle dropped out but Frank continued on with the group and has played almost continuously since. Frank considered it a great honor to be inducted into the “National Traditional Country Music Assn. Hall of Fame in 2008 and honored with a Lifetime Achievement Award in 2018. The first song to win awards and accolades for the group was one of Frank’s compositions called, “False Hearted Love” in 1976. Over the years it followed with a number of other compositions that have firmly established Cedar Hill on the National and International stage for which they are exceedingly grateful.

Though many personnel changes have taken place over the years, Cedar Hill has stayed consistent and true to their Ozark roots and the emotional brand of bluegrass music. Cedar Hill’s music has been described as an “original, emotive brand of song and hard driving bluegrass of tradition” and “the real deal”. The group both individually and collectively have been recipients of numerous awards and accolades over the years. They occasionally do a few cover songs but rarely record them, considering it important to make a contribution to the music they love.

According to some programmers, their song, “Pearl”, a personal story of a friend of Frank’s, has been the most requested bluegrass song on the National XM/Sirius radio program, “Bluegrass Junction” and other stations for over 10 years. The current line up of musicians, Frank Ray – mandolin and vocals, Bill Cross – banjo and vocals, Pete Brown – fiddle and vocals, Patti LaFleur – bass and vocals, and Dalton Harper – guitar and vocals, is perhaps the most cohesive group Cedar Hill has ever brought together, allowing them a freedom that causes their music to flow with an ease and a joy that is clearly evident when watching their performance.

It is that same easy going, cohesiveness that also allows Frank to make use of his natural flowing Ozark humor, to the point that every now n then some folks will ask if they have any of Frank’s humorous stories recorded. The fun and smiles this band exhibits on stage transports you to a favorite place and time as you enjoy one of the best musical entertainment experiences you’re apt to find.

The audience not only gets caught up in the emotion of the music with tears or laughter, but become their friends. Don’t miss an opportunity to join Cedar Hill for some music that will stir your emotions, cause you to tap your toe, smile a lot, and leave knowing you have made some new Ozark friends that are the same whether they are playing in their native Ozark Mountains, in The Performing Arts Centers of London, England, or the stage of the Grand Ole Opry.

Highly regarded, as one of Bluegrass music’s most recognizable and finest high lead and tenor vocalist, Larry Stephenson has been headlining festivals and concerts for 30 years. He formed The Larry Stephenson Band in 1989 while living in his home state of Virginia.

Larry’s crystal-clear tenor voice has provided a musical home for some of the finest sidemen in contemporary bluegrass history. Many appearances on the Grand Ole Opry and RFD-TV has made The Larry Stephenson Band a fan favorite all across the US and Canada.

Another part of Larry’s recording career he’s very proud of, are his gospel recordings. Five all gospel albums and many gospel songs recorded on his secular projects, The Larry Stephenson Band has fast become in demand at churches and gospel concerts.

Throughout his 30 years of fronting his own band, and over 40 years as a major touring performer, Larry Stephenson has been well-recognized and awarded by fans and his peers in the bluegrass industry. With a move to Nashville, TN in 1992, the band became fast regulars on the Grand Ole Opry. In 1996, the Virginia Folk Music Association inducted Stephenson into The Virginia Country Music Hall of Fame. Since that time, he has garnered numerous IBMA and SPBGMA nominations and awards. In 2018, The Society for The Preservation of Bluegrass Music in America (SPBGMA) inducted Larry in their Hall of Greats.

Larry makes his home on the outskirts of Nashville, TN with his wife Dreama and their daughter Whysper. 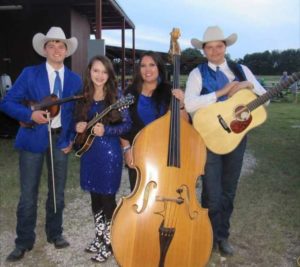 The Baker Family is a high energy bluegrass band located in south central Missouri. We perform at bluegrass events throughout the United States from Maine to California. We would love to come be apart of your next festival!!

The North Carolina duo has spent a decade amassing a fan base, reaping awards, becoming Grand Ole Opry favorites and issuing a string of well-received albums. But the release of Inner Journey is a diploma of excellence for the team.  The album garnered the duo their highest chart debut to date, entering the Billboard Bluegrass Album chart at #2.

Their families both hail from Avery County, NC, which is deep in the heart of the Blue Ridge Mountains. Darin grew up in the Piedmont town of Cherryville.

Darin Aldridge left the Tarheel State to tour with the star bluegrass band The Country Gentlemen in 1999-2005. But he found his life’s companion back at home. He met Brooke Justice in 2005. By then, she’d been crowned a champion in more than 30 vocal contests. 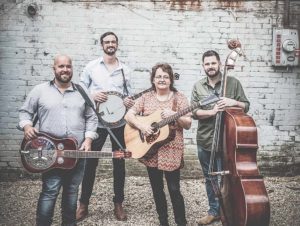 Raised in the coal fields of Appalachia, life for Dale Ann Bradley was much like her musical heroes from the same area in the southern mountains. No running water or “safe” electricity was available until she was a senior in high school. “One light socket and an extension cord kept a 1950’s “Philco” refrigerator, box fan, and radio going. Looking back now I know how dangerous that was.”

Dale Ann has always expressed in her recordings the boundlessness of Bluegrass music and its musicians and vocalists by incorporating songs from all styles into her shows and albums. “Bluegrass can go anywhere, do anything, rip your heart out and make you laugh.” The songs are true and full of passion. The artists love it like their families, which in reality is where all the emotion comes from. The roots of this tree are strong and the branches are blooming. Through all the ups and downs, happy and sad times, Dale Ann has always had a song. No one has handed her anything. She has garnered international success doing the kind of music she loves.

As time goes by, Dale Ann shows no signs of slowing down anytime soon. Her most recent 2020 project involves a collaborative album with Sister Sadie bandmate Tina Adair on “Oh Darlin’” released on Pinecastle Records. The collection includes full-length stripped down duet recordings from start-to-finish. As the reigning 2020 SPBGMA Female Vocalist of the Year winner, the Kentucky native has no signs of slowing down anytime soon. Fans can catch her on the road performing solo shows, along with select shows with her Sister Sadie bandmates.